Los Angeles, CA.  June 3, 2021 – US Nuclear’s (OTCQB: UCLE) partner MIFTI expects within 18 months, to be generating over 1,000 trillion neutrons per pulse in a compact 10 MegaAmpere device with the goal of achieving net energy gain for the first time in the history of humankind. The most important criteria for the successful creation of controlled thermonuclear fusion energy is the generation of thousands of trillions of neutrons; enough to perpetuate a reaction that would achieve breakeven or net-energy-gain, thus generating energy much greater than the energy required to produce the effect. MIFTI’s Staged Z-pinch (SZP) fusion generator is comparatively simple, cost-effective, scalable, and fueled by a low-cost isotope of hydrogen from seawater. All experimental testing strongly indicates that MIFTI’s invention is a viable answer for cost-effective carbon-free power production. 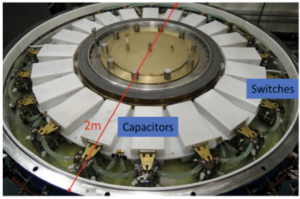 MIFTI has already achieved extraordinary success, repeatedly generating over 50 billion neutrons per pulse on a 1 MegaAmpere machine and achieving the required temperature, stability, and confinement time.  Advanced computer simulation codes MACH2 and HYDRA predicted 50 billion neutron generation on MIFTI’s 1 MA machine, and MIFTI achieved those numbers repeatedly. Now, MACH2 and HYDRA predict that MIFTI’s 10 MegaAmpere machines will produce over 1,000 trillion neutrons per pulse, and once demonstrated, the transformation of our power production systems should ensue. In addition, MIFTI’s SZP thermonuclear fusion technology will have immediate utility for the cost-effective production of radiopharmaceuticals used in nuclear medicine through their MIFTEC division.

MIFTI has been awarded a $5 million ARPA-E grant and was recently granted the INFUSE award so that Lawrence Livermore National Lab could use MIFTI’s technology to create a large neutron flux that LLNL requires for the development of their neutron detector. This is significant because it is logical that LLNL would have selected the technology that creates the most neutrons and they selected MIFTI. Estimates indicate that one $25 million US Nuclear and MIFTI 20 MegaAmp SZP Fusion Generator should deliver more neutrons than billion-dollar nuclear fission reactors do.

In recent news, major oil companies, under mounting pressure to protect the climate, have been investing in nuclear fusion technology. Chevron, ENI, and other major oil companies have already invested in companies developing fusion power generation. Three of the largest oil companies recently faced blows over climate change: a Dutch court told Royal Dutch Shell to reduce its greenhouse gas emissions by a staggering 45% by 2030, 60% of Chevron shareholders voted on a resolution reducing emissions, and ExxonMobil lost two board seats to an activist hedge fund. 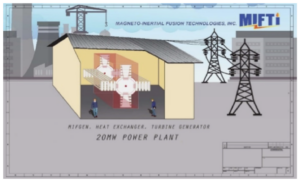 MIFTI is at the forefront of the fusion power generation revolution, and its goal is to achieve net energy gain for the first time in history within 18 months. US Nuclear is an investor, strategic partner, and prime contractor, owning 10% of MIFTEC and exclusive manufacturing and sales rights for the medical isotope generators in North America and Asia, and a smaller percentage of MIFTI.